In 1953, the Randers Tegl group expanded through a new and modern brick factory. The factory was built on a field near the Nørreå River, South of Hammershøj, where there's a lot of good quality clay. The new factory in Hammershøj has developed since then into one of the largest and most modern brick factories in Northern Europe, with 3 separate production lines. It's a completely rationally built brick factory with a yearly capacity of 70 million bricks.

In Factory 1 we produce our special colours - exclusive, unique bricks, for which we combine, among other things, coal burning repeated a number of times with the efficient gas burning. The brick factory was modernized in 2000.

Factory 2 is a completely automated extruded brick factory, in which we produce Danish, Norwegian, Swedish and German formats. The factory has a 16.000 m³-wide marsh area with clay processing. The drying process occurs in drying rooms and the burning process in a 137-metre long tunnel oven. The factory is continuously updated in respect to quality assurance and energy optimization. We produce red, red-brown and brown bricks.

Factory 3 is a modern factory, where we produce hand-struck bricks and hand-made bricks with the help of machines. The production line has a 10.000 m³-wide marsh area, 3 water-struck presses and 2 hand-struck presses, a drying room and a 135-metre long tunnel oven. The brick factory is continuously modernized. 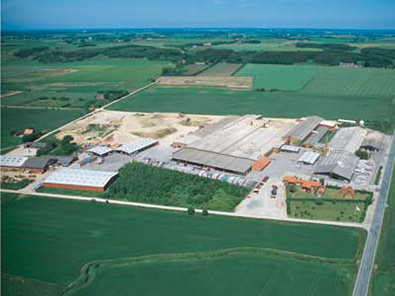