The Gandrup brick factory lies between Aalborg and Hals. At this brick factory over 20 different types of water-struck bricks with 4 visible sides are produced, as well as extruded bricks. The production consists of light bricks with saw dust, Moler bricks and the special Gandrup floor tiles in fired brick format.

In 2004, the factory was granted the Danish Energy Saving Prize, as acknowledgement for its efforts to reduce energy consumption.

The factory lakes, the former three clay coolers, are today part of a beloved 25-ha wide local recreation area with a very varied flora and fauna. 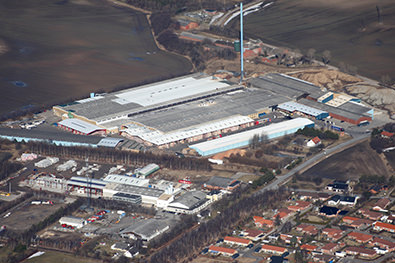 It costs a little more to have a completely brick built house, but it's a very worthwhile investment. The inner walls made of bricks help to adjust the building's temperature, as they store heat and cool air.