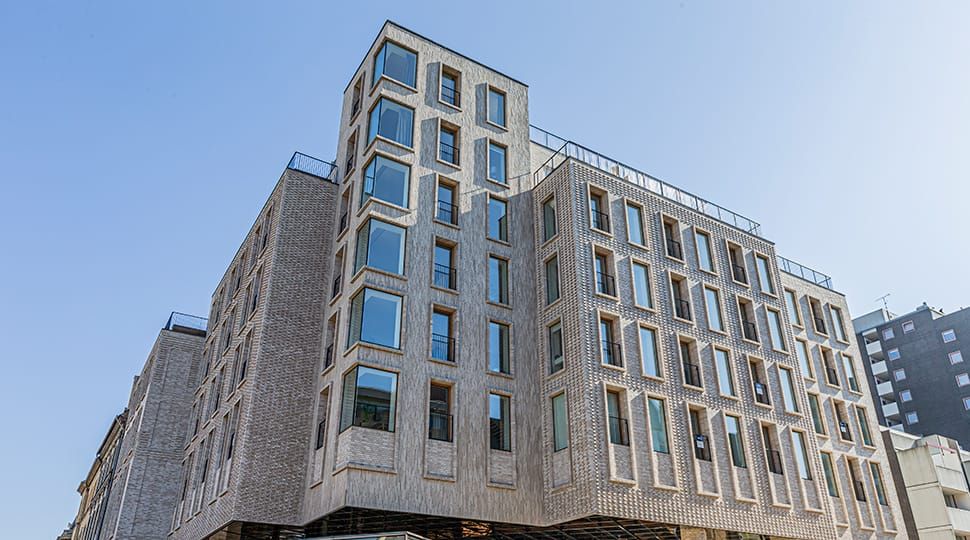 Innovation in Brick Design Blends Past and Present

It is a rare occasion for a historic neighborhood to have new buildings. Never the less, this is exactly what happened along the elegant and ornate structures of Frederiksberg Allé in Copenhagen. The historical avenue was inspired by Parisian architecture and features many buildings notable for their intricate architectural detail.

The design of this new project includes a cultural and culinary center, 30 residential apartments, and a busy metro station beneath ground level. The building expects daily traffic of approximately 10,000 metro travelers who will be passing through the building on their way to and from the station. The metro itself is 22 meters below street level and will have trains coming and going every 3 minutes. To ensure that the building is architecturally cohesive with the surrounding neighborhood, the architects from Copenhagen-based Cobe have designed five buildings arranged around an inner courtyard.

Towering Above the Track

The building's open ground floor contains escalators and elevators leading down to the metro. The building's location on top of the metro station means that the supporting structures must be placed on either side of the main tracks of the metro station. This creates an 18-meter span between the supporting pillars and an 8-meter cantilevered support protruding out towards the main concourse. The entire building is clad in brick, and it required a unique solution to support that much masonry. Ole Larsen, who was in charge of all the brickwork on the building, explains how:

”Normally, you would have a foundation for your masonry. We couldn’t do that here, as the building houses an underground metro station. Our solution was to have a small number of strong supporting pillars and a single supporting wall to hold up the entire building – and to clad the façade with bricks.”

"We had brick shells specially made and used them as a weather shield. On the tallest building, we cut brick shells based on the standard brick, we used throughout the project. We then glued these onto a light and airy façade in order to reduce the weight of the building. We used the brick shells wherever we were not able to lay bricks to ensure that the entire building appears as a single cohesive whole, and not one that is broken up, so to speak, as a result of using other building materials...In terms of cost, it costs as much as it would to build a structure with a heavy brick façade."

The Spirit of Frederiksberg 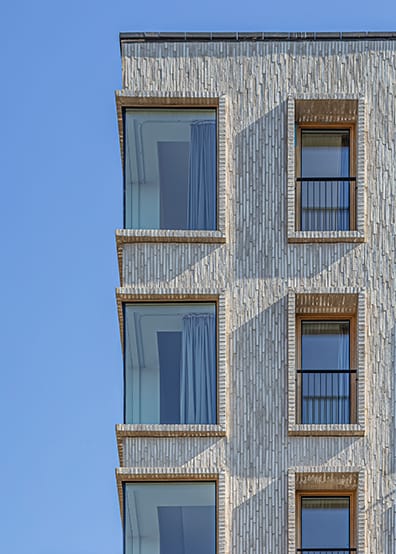 The rhythm and size of the windows was designed to reflect that of the adjacent properties, structures which also inspired the corner building’s tower-like appearance to blend the new project with the surrounding architecture.

“There are different heights, types and façades throughout the project. But there is a common element throughout. The building uses the same brick from Randers Tegl, RT 554, which has a special finish. This is a surface treatment that is used on this type of brick that has been made specially for this project. This was done by working closely with architects from Frederiksberg municipality which selected the bricks. They chose the nuances and finishes required for the face of the bricks for us to work with,” says Ole Larsen.

Another special brick used in the project is the Randers Tegl Ultima waterstruck brick, a linear format brick that's twice as long as a typical brick yet only 38 millimeters in height. These unique dimensions bring a traditional material into a modern design aesthetic, perfect for a project which needs to blend past and present. The Ultima bricks can be set vertically, as well as horizontally, creating yet another distinctive look that can be seen in this project.

While the extra-long Ultima bricks are used alongside normal length bricks of the same color to create a subtle, rhythmic contrast, the waterstruck texture of the brick is continuous through the project. Waterstruck bricks have a delicate texture created by removing the bricks from their molds with water. The water and the mold itself leave their imprints on the bricks, making each individual brick slightly different from the next. The bricks are smooth, but their subtle texture creates visual interest, especially when applied on a large scale. The vertical alignment of Ultima bricks in contrast to the horizontal use of regular bricks is a devilish detail that distinguishes this project as some of Copenhagen’s finest masonry in recent times. A dramatic twist of two bricks related in a very special bond.

Brick bonds and style vary greatly from building to building, and this is one of masonry's most defining and customizable features. The bonds in this project are all variations on the traditional style used in Frederiksberg, based on an old Danish style of brick bond. The specific pattern comprises two whole bricks and a half brick (a so-called half bat). What is new here is that the end of the half-brick protrudes outwards by three centimeters. This creates shadow effects on the façades, adding visual interest and enhancing the overall architectural impact of Frederiksberg Allé.

Involving Bricklayers from the Outset

The collaborative nature of the project is what allowed the team to smoothly execute this unique and complex approach to the building's cladding. The close working relationship from the outset between the municipality, the architects, and the builders ensured that all were on the same page and allowed a sharing of knowledge unique to each party. Ole Larsen describes the collaboration process as follows,

“We were able to do this work quickly and easily because we had been working closely with the municipality and the architects from the very start and we understood the thinking behind the project... In the past, architects and builders would always work together from the start, but over time that ceased to be the case, and it’s a shame. The fact that we have been involved in the project from the very beginning is new to us. But there is no doubt that we have helped one another.” 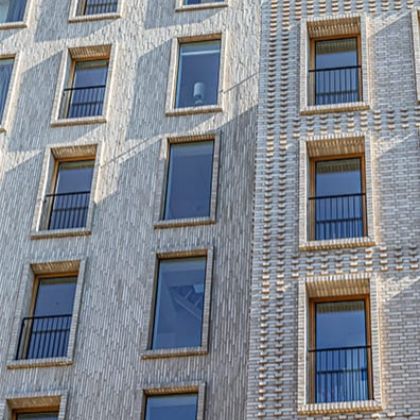 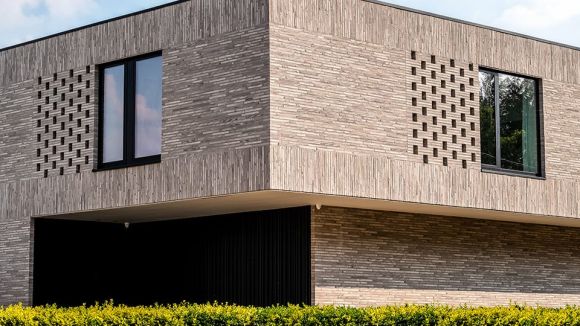 As one of the oldest building materials, dating back to at least 7500 BCE, brick is often thought of as a ... 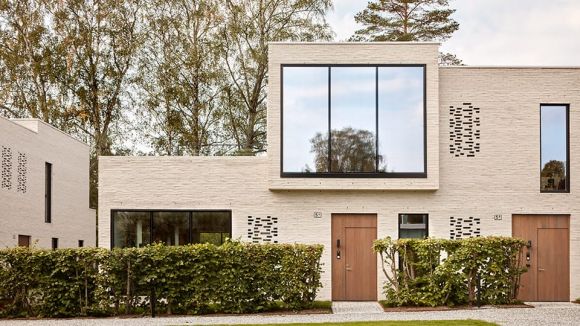 The beauty of inconsistency

It takes innovative material to challenge status quo and change the way we arrange our lives, houses and cities. Recent projects ...